There are more than 40 types of zeolites. They differ by:

The efficiency of zeolite tuff depends on the following factors: 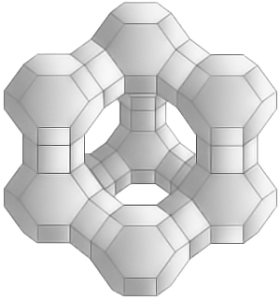 Zeolite is a unique mineral that adsorbs the toxins, releases radicals and metals from your body and boosts your immune system.

It has been proven to balance the body’s pH and create an environment in which harmful foreign cells cannot grow.

Independent studies have shown that this mineral is effective in fighting certain types of cancer, in part by creating a hostile environment for cancerous cells’ growth.

Purification, Detoxification, and Purging by Zeolite

We are regularly exposed to heavy metals, radiation, and other types of waste products exhausted from industrial sites into the environment. Over time, these toxins build up in our bodies, creating an acidic environment (or acidosis) which causes harm to our bodies. Cell membranes become “clogged” and our cells slowly suffocate. Build-ups of heavy metal toxins (especially cadmium, mercury and lead) are deeply associated with the development of many serious medical conditions.

Zeolite is Effective in Combating a Toxic Body

Due to Zeolite’s extraordinary adsorption and selection capabilities, Zeolite binds with waste products, toxins, and most importantly, with harmful heavy metals; allowing these substances to be easily eliminated from the body. Zeolite is often used to eradicate heavy metals such as lead, cadmium, and mercury build-ups (such as those used in dental amalgam fillings). Due to the alkaline properties of Zeolite, the body’s alkalinity can be increased and pH levels can be properly regulated.

But Zeolite can do a lot more! It is also a highly effective antioxidant due to its ability to neutralize free radicals. Free radicals are atoms, or groups of atoms, with unpaired electrons. They are highly reactive and can do a great deal of cellular damage when they come in contact with other molecules. Over time, they can become highly destructive to cellular components, such as tissues, DNA, and cell membranes. As a result, cells often function poorly or die due to this destruction.

Zeolite is a powerful antioxidant that protects against this cellular destruction. While most antioxidants share an electron with free-radicals to stabilize them, Zeolite absorbs the entire free-radical, thus permanently neutralizing its potential danger and damage to adjacent cells.

Zeolite is the Super Detoxifier

Toxic chemicals, including poisonous heavy metals like mercury, lead, arsenic, and cadmium, are some of the worst problems faced by all life as we know it. We literally live in a chemical soup. Chemicals enter our bodies through the food we eat, the water we drink and the air we breathe. This situation we live in threatens our survival and well-being.

Until recently, the only sure way to remove the most destructive heavy metals and toxins from our bodies was through I.V. chelation, a process both invasive and horrendously expensive. Even if we spent hundreds of hours and thousands of dollars on chelation treatments, toxins would eventually re-enter our bodies through another breath we take, another meal we eat and another beverage we drink.

Ingesting toxins is unavoidable. However, daily detoxing by Zeolite will help curb the damage any toxins could do by extracting them as soon as they have built up. For this reason, Zeolite is believed to be one of the most important substances for maintaining our health. Since detoxing by Zeolite is gentle and lacks a healing crisis, there should be no concerns about taking it. It recommended to take Zeolite at least once per day for optimal effects.

Studies have shown that Zeolite has a high affinity for trapping lead, cadmium, arsenic, mercury, and other potentially harmful metals. Through the process of cation exchange, zeolite can lower overall heavy metal exposure in individuals. This would have a dramatic effect on reduction of risk of certain cancers, heart disease, and any other sickness that may stem from or be worsened by the accumulation of toxins.

The body’s pH level influences both immunity and brain function, among other impacts. An acidic blood pH (7.34 or lower) creates a precondition for cancer. In an acidic environment, brain cell function can also be impaired causing depression, anxiety, stupor, paranoia, delusions or hallucinations.

Zeolite is a unique antioxidant. A traditional antioxidant works by absorbing excess free radicals into its system because it has an impaired electron. In contrast, Zeolite traps free radicals in its complex structure, therefore deactivating and eliminating them.

Other benefits of taking Zeolite include:

How does Zeolite work?

Zeolite is an alkaline mineral that is very porous and has a negative charge. Since most toxins, such as heavy metals, radiation, and pesticides are positively charged, Zeolite is pulled towards toxins like a magnet and sucks them up into its structure.

Who can take Zeolite?

Anyone can take zeolite. It is non-toxic and has no adverse effects.

Why should I take zeolite?

Zeolite can be used by individuals suffering from sickness or by those striving to maintain and improve their health. The types of sickness can range from minor bacterial, fungal or viral infection to something as severe and deadly as cancer. Zeolite helps keep the body alkaline and pH levels balanced, meaning that sickness CANNOT spread no matter how minor or extreme the illness may be.

How long does it take Zeolite to work?

Zeolite works immediately. As soon as you take one dose, it will immediately start detoxing.

When will I see or feel a difference?

It depends on each individual. Some may feel a difference immediately, and some may feel no difference at all. This does not mean that it’s not working; Zeolite is always detoxing. It also depends on the level of toxicity of each person’s body.

Nevertheless, one should continue to use zeolite at least three times per day until their health issue is resolved, and use it at least once per day to maintain good health.

Is there a difference between various types of zeolite?

Yes, there are many types of Zeolite, but only Zeolite-Сlinoptilolite should be used in supplements. Further, there are also different levels of purity in supplements. Often, Zeolite can be “dirty” because it is contaminated with impurities contained in the soil. Also, Zeolite may have large amounts of amorphous solids, which is essentially additional dirt that comes with mining.

Purity is something that should be taken into consideration when shopping for a Zeolite product. The purer Zeolite is, the more potent the detox will be.

What is the difference between other detoxifiers and zeolite?

Other detoxifiers are often accompanied by a healing crisis. Zeolite is absent of a healing crisis because it has a strong structure, which protects the bond between a toxin and Zeolite. This means no healing crisis and no sick feelings are experienced; rather, a gentle and safe detox is given instead.

Quality is the most important aspect when choosing Zeolite products. You need the best to protect your health. Mineral Medix Supplements is the ONLY Zeolite brand we recommend.